Dumbarton Oaks seems kind of sleepy in August. The summer population of students and interns has departed and next year’s fellows have not yet arrived, so the number of people around the place is diminished. Despite some remarkably nice weather for a Washington summer, things are still a little subdued.

Even in the quiet that comes from the building being less full than usual, however, the staff are as hard at work as ever: planning for the October symposium is proceeding apace! Our fall symposium in Pre-Columbian Studies, this year, is titled “Processions in the Ancient Americas: Approaches and Perspectives.” My job is to assist with special exhibits in the library, so I’ve been helping our librarian for Pre-Columbian Studies, Bridget Gazzo, prepare the book exhibit that will tie into the theme of ‘processions.’ 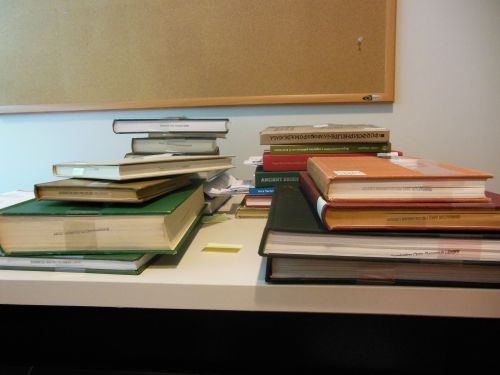 Books for the exhibit are piling up – and this is only a few of them!

Much of the exhibit will emphasize the importance of the space through which people proceeded. Just as the Macy’s Thanksgiving Day parade has to be held in Manhattan (I find it nearly impossible to imagine it in the suburbs), so too did the space for Pre-Columbian processions matter, and matter a lot. One type of space the exhibit emphasizes is the plaza, which in Mesoamerica was often paired with the pyramids we associate with Aztec or Maya sites.

This emphasis on space, both in our exhibit and in the symposium itself, helps offer a corrective to archaeology’s tendency, sometimes, to treat buildings as though they were intended to stand separate from their environments. One rare book we can’t use in the exhibit shows some good examples of this tendency. I liked this book, even though we can’t put it on display, so I’m going to show you some pages from it now. 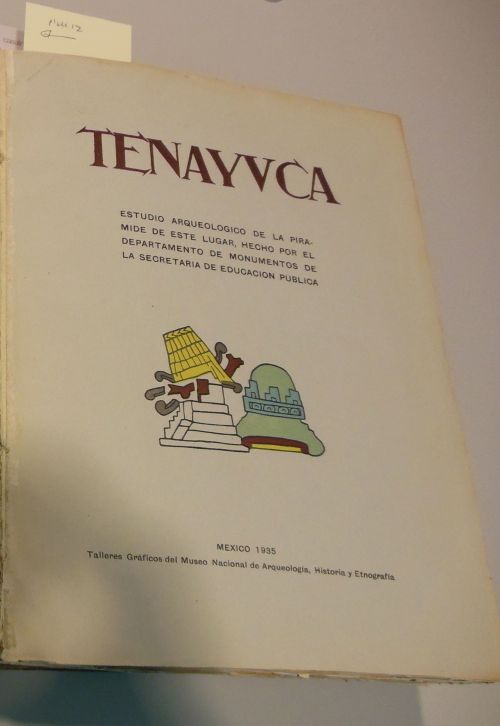 This book is the archaeological report from an excavation done in 1935 at the pyramid of Tenayuca, a Chichimec site in the Basin of Mexico, near the Aztec capital at Tenochtitlan. The Chichimecs were a warlike tribe from the region of northwest Mexico, whom the Aztecs claimed as an important part of their heritage. (The Aztecs saw themselves as the rightful heirs to both the Toltecs, a legendary civilization known for their culture and arts, and the Chichimecs, consummate warriors whose myths involved more skinning of people than do most. Thus the Aztecs could claim to be cultured and fierce at the same time.)

“the Pyramid in the different stages of its construction”

Among other things, the report contains plans of the pyramid in each stage of its construction, although I can’t immediately verify their accuracy. The image above shows the page on which the plans of each phase of the temple could be compared with each other, so readers could understand how the site changed over time, getting bigger with every iteration. The authors’ hypothetical illustration of what the final phase looked like when it was new is below. 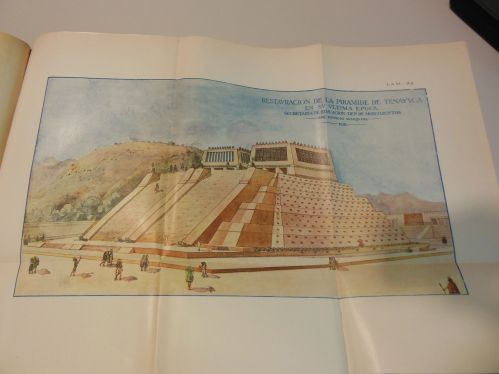 This page also shows what I mean about taking buildings out of context—although you can see a bit of the pyramid’s surroundings in this image, most of them are cut off. And that’s the most we see of the pyramid’s context in the entire book! Most of the images look more like the line drawings above, even though in most of Mesoamerica, the pyramid wasn’t meant to be understood alone. We can’t understand this site without understanding the pyramid, so this book represents a necessary part of that effort. In our exhibit, however, I hope that our emphasis on the plaza and the processions that took place in it will help viewers focus on how the complex of pyramid and plaza worked together when they both were built.

As for why we can’t display the book right now, I’m afraid it needed a visit to the hospital of injured books, which I’ll profile in an upcoming blog post. 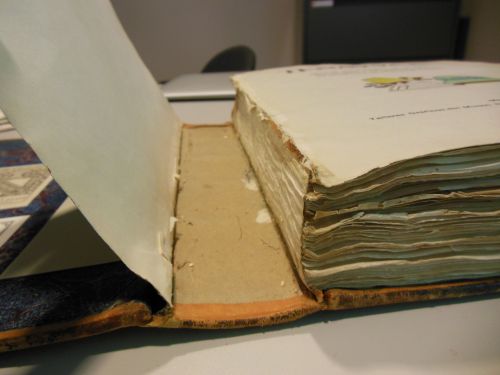 When I was browsing some old entries in this blog for fun (a leisure activity I highly recommend), I came across this post from way back when, called “Steps & Stairs.” That post is about steps, movement, and the rhythm of walking throughout the Dumbarton Oaks gardens, so if you’re interested in processions in a very different context, that’s one place to start!