Recently, the Rare Book Collection at Dumbarton Oaks added a new item to its inventory, one that had clearly been much consulted by previous owners. Many of them left their marks on the book, making the history of its previous four centuries visible today. The book in question is a bilingual Spanish-Quechua edition of the Jesuit Cardinal Roberto Belarmino’s Doctrina Christiana, published in 1649; it fits within our Pre-Columbian collection because of the Quechua text.

One thing I found interesting about this book was that the front matter, rather than just having an introduction or an acknowledgments page—it had those, too, in seventeenth-century form—included several poems dedicated to the translator, Bartolome Ivrado Palomino, who rendered the Spanish version of the text into Quechua. There were pages of these poems! Here’s the beginning of one:

The first stanza runs, “Learned doctor, illustrious Palomino / You who give the Indians this brief translation / Where they can drink the sacred faith of God / In nectars of crystal language.”

The remains of a historical controversy also appear in Palomino’s translation of the Doctrina Christiana. In colonial Peru, there was a struggle between different groups of Christian evangelists about how to translate their faith into Andean indigenous languages. Quechua, for example, didn’t have a synonym for “God” as the Spanish understood the word. So some Christian thinkers argued that they should use the Spanish “Dios,” and that Quechua speakers would eventually come to understand it as a loan word. Other Christian thinkers insisted that evangelization would never succeed unless they could explain Christian theology using words from the local language, and tried to come up with work-arounds for important concepts. Palomino’s translation clearly took the first side, as you can see from this page. On the left, in paragraph D., the Spanish reads “If Christ is God [Dios]…” The corresponding Quechua is “Christo checcan Dios,” using the Spanish word. 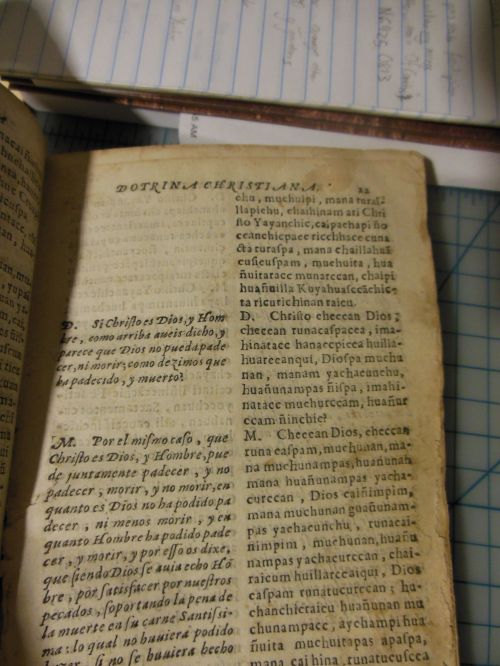 To my surprise, I didn’t see any marginalia in the pages of the text itself. I would have expected otherwise, because the front and back flyleaves were covered with people’s names. I assume, but cannot prove, that these were various owners of the book over the years. 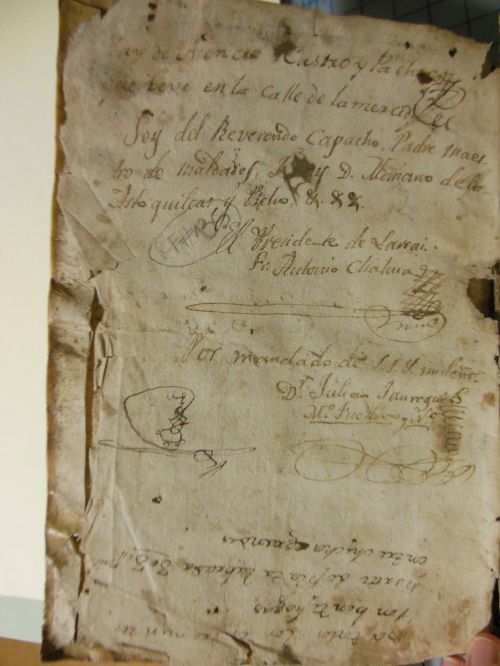 Some annotations from the front of the book

One such person who had their hands on this book also drew a little figure whom I like very much. I believe the drawing matches the text “Soy el D. Castro…,” “I am Don Castro…” since the ink is the same color. Maybe the figure is an illustration of somebody else, but maybe it’s a self-portrait! 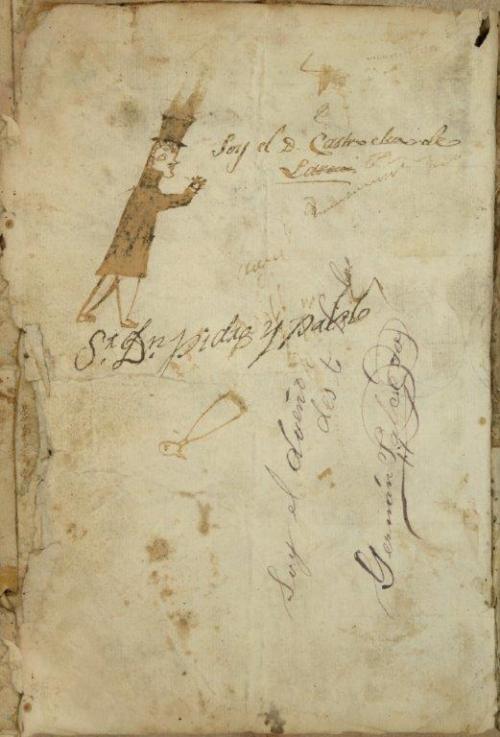